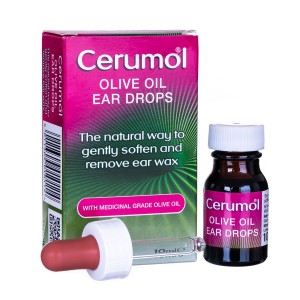 Cerumol Olive Oil ear drops are a natural treatment for excessive or stubborn earwax. The bottle comes with a dropper built into the cap for ease of use.

Going to the pharmacy for treatment can be a burden sometimes. With Prescription Doctor, you can buy Cerumol Olive Oil ear drops online hassle-free. We offer a fast next-day discreet delivery to ensure you get the treatment when you need it most.

Cerumol Olive Oil ear drops are a natural treatment for excessive or stubborn earwax. The bottle comes with a dropper built into the cap for ease of use.

Going to the pharmacy for treatment can be a burden sometimes. With Prescription Doctor, you can buy Cerumol Olive Oil ear drops online hassle-free. We offer a fast next-day discreet delivery to ensure you get the treatment when you need it most. This content has been written and checked for quality and accuracy by
Mohamed Imran Lakhi Content Administrator Updated on: 26/05/2020 Next review: 26/11/2020

Cerumol Olive Oil Ear Drops consists of 100% extra virgin olive oil which helps to gently soften and remove excessive ear wax allowing it to fall out more easily. It comes with a dropper to deliver a small dose into the outer ear.

Due to the natural ingredient, Cerumol Olive Oil ear drops are well tolerated and are unlikely to cause side effects. They do not need to be warmed in the hand before use and do not stain clothes.

Cerumol Olive Oil is known as a Cerumenolytic; a contraction of the latin words for earwax (cerumen) and the destruction of cells (lysis). Cerumol works by disintegrating the earwax, allowing it to fall out easier.

What is earwax impaction?

Earwax build-up occurs due to several reasons. Some people naturally produce more earwax which can lead to a build up. Earwax impaction can also occur from an excessive use of earphones or attempts to remove earwax using cotton buds. Rather than remove the wax, these actions often push the earwax even further in, resulting in a blockage.

Earwax performs an important role in our ears because it prevents debris and germs from entering the inner ear. But when too much is produced, it dries out and leads to a blockage in the ear canal.

Excessive earwax can be uncomfortable and result in a number of conditions including temporary hearing loss, earache, itchiness, dizziness, ringing in the ears (Tinnitus) and even an ear infection.

How to use Cerumol Olive Oil Ear Drops?

Before use, ensure that the provided dropper is not damaged and the drops are at room temperature. You do not need to warm up Cerumol Olive Oil ear drops.

Use the drops twice daily for up to seven days. If you continue to experience earwax problems after using Cerumol Olive Oil ear drops, speak to your doctor or pharmacist about alternative treatments.

Do not use Cerumol Olive Oil Ear Drops if you have an ear infection or a perforated eardrum. It is best to speak to your doctor before using any ear drops to ensure that your eardrum is intact and that you have no ear infections, as ear drops can exacerbate these conditions.

Always keep medicines out of the sight and reach of children.

What should I do if I forget to use Cerumol Olive Oil Ear Drops when I should?

If you forget to use Cerumol Olive Oil Ear Drops, it should be used normally as soon as you remember.

What should I do if I use too many Cerumol Olive Oil Ear Drops?

Applying too many Cerumol Olive Oil Ear Drops is unlikely to cause any harm.

Simply wipe away any excess liquid from the outside of your ear using a clean, dry tissue.

Cerumol Olive Oil Ear Drops are unlikely to affect your ability to drive or operate machinery.

Is the Cerumol Olive Oil the same as kitchen olive oil?

What is earwax impaction?

How to use Cerumol Olive Oil Ear Drops? 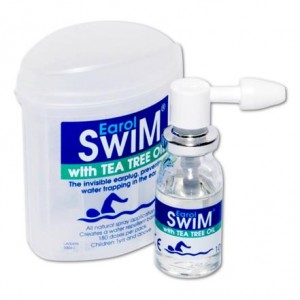 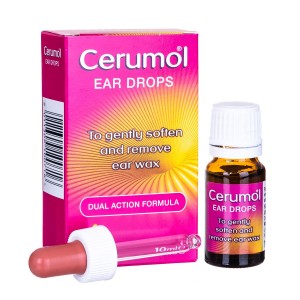 Order now to receive your order Tuesday, January 31
Get Started
Can we help?Our Patient Service is available Mon-Fri 09:00-16:00Customer Service